Switch to the dark mode that's kinder on your eyes at night time.

Switch to the light mode that's kinder on your eyes at day time.

Why Is My Garlic Blue? 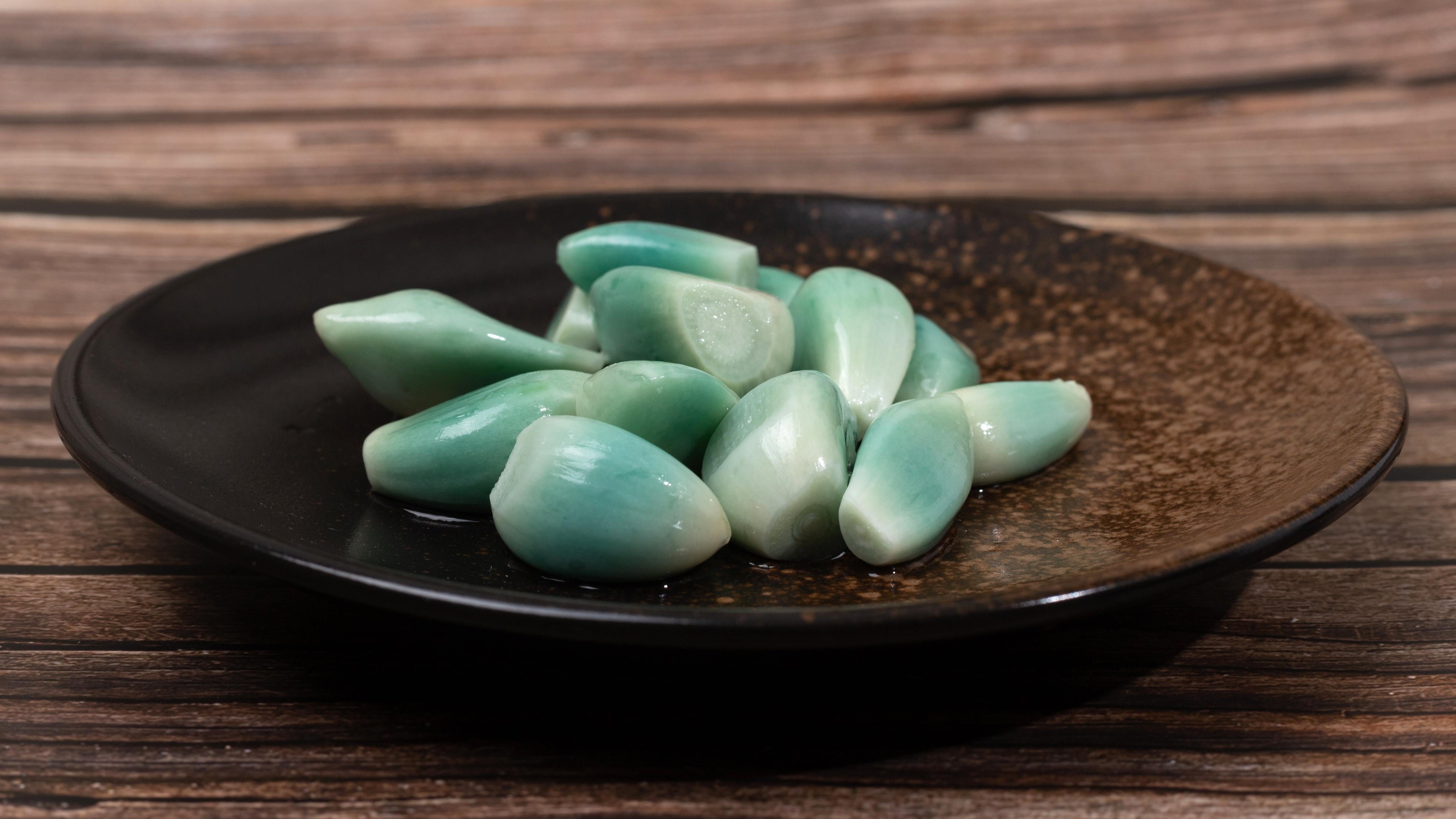 With a few noticeable exceptions, such as blueberries, blue raspberry candy, and certain cocktails, blue is not a color you want your food to be, especially if you weren’t planning on it. Blue (or turquoise, or green) garlic is particularly startling. Garlic is supposed to be beige, golden brown, or a deep, sticky black, but-much like the vivid patterns on a poison frog- blue garlic sets off some alarm bells.
Why does this happen?
I first encountered blue-ish garlic during a sous-vide experiment, though it is most commonly seen during pickling. The blue hue is caused by a chemical reaction between a sulfur-containing amino acid (alliin) and an enzyme (alliinase). These two compounds are isolated from each other in whole garlic, but chopping, mincing, and crushing garlic exposes these two compounds to each other, giving the garlic its famous pungent flavor and aroma. According to The Spruce Eats, introducing an acid (such as pickling vinegar), can cause the the color change, though metals can also trigger a similar reaction:
When garlic is combined with an acid (such as vinegar), the allicin reacts with amino acids in the garlic to produce rings of carbon-nitrogen called pyrroles. Pyrroles linked together form polypyrroles, which throw colors. Four pyrroles clustered together create green (this is why chlorophyll is green). Three pyrroles linked together creates blue.
A similar color-forming reaction can occur when the garlic is in contact with minerals from certain metals, including copper, aluminum, iron, and tin. The minerals can come from pots or pans made of those metals, or it can come from trace minerals in the water.
The acid itself isn’t used up in the reaction, but it helps facilitate the change by breaking down the cellular walls even further. It’s quite possible you’ve pickled 50 heads of garlic without observing such a color change, depending on the freshness of the garlic you pickled. According to food science writer Harold McGee, aging garlic to encourage the color change is a common practice in northern China, where the allium is soaked in vinegar to create Laba garlic, a pickle that is prized for its vivid color and sour, slightly spicy flavor:
According to chemists at the China Agricultural University in Beijing, aging the garlic gives it a chance to accumulate large quantities of one of the chemicals that generate the color; fresh garlic doesn’t green much at all. And a strong green color develops in Laba garlic only with acetic acid, the main acid in vinegar (also found in sourdough), because it’s especially effective at breaching internal membranes and mixing the cell chemicals that react together to create the green pigment. The pigment itself turns out to be a close chemical relative of chlorophyll, which gives all green leaves their color.
Bowflex T10 Treadmill
Run for it
Can go up to 12 MPH and has an adjustable incline, it also has a 10″ screen capable of streaming shows from Netflix et al, can be used to design specific workout plans to match your goals and abilities, and even comes with a Bluetooth wireless armband with built-in speakers.
Can I eat it?
As you might have guessed, blue, turquoise, and green garlic are all perfectly safe to eat and do not taste all that different than beige garlic. You can even make your own Laba garlic and eat it as a pickle alongside some dumplings (or any other greasy food that would benefit from a sour, spicy pickle).
How to prevent your garlic from turning blue
Even though blue garlic won’t cause any bodily harm, there are some instances where the blue color can look a little off putting, particularly if it’s minced into little bits and smeared on garlic bread, or stuffed into a chicken breast.
Using fresh garlic, or cooking it before it’s exposed to any acid can help. In the case of pickling, a quick blanche can deactivate some of the enzymes responsible for the color change. Avoiding copper, aluminum, and cast iron cookware can also decrease the chances of your garlic blue-ing itself, but the easiest way to deal with blue garlic is to eat it. If nothing else, it will give you a chance to look real smart at a dinner party, which is always my goal when dining with a group of friends and associates.

What do you think?

Get the best viral stories straight into your inbox!

Don’t miss out on new posts

Back to Top
Close

Hey Friend!
Before You Go…

Get the best viral stories straight into your inbox before everyone else!

Don’t miss out on new posts!